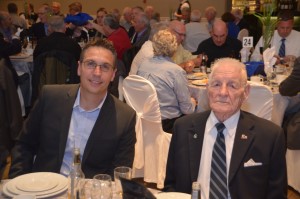 President Watson also had the honour to award Brother Dan Santoli with the Walter Baumann Award for his years of dedication and distinguished service to Fire Fighters at the Local and Provincial level.

Congratulations to all of our new Retirees and we hope to see all of you again next year.

Fraternally and with Respect, Executive Committee.