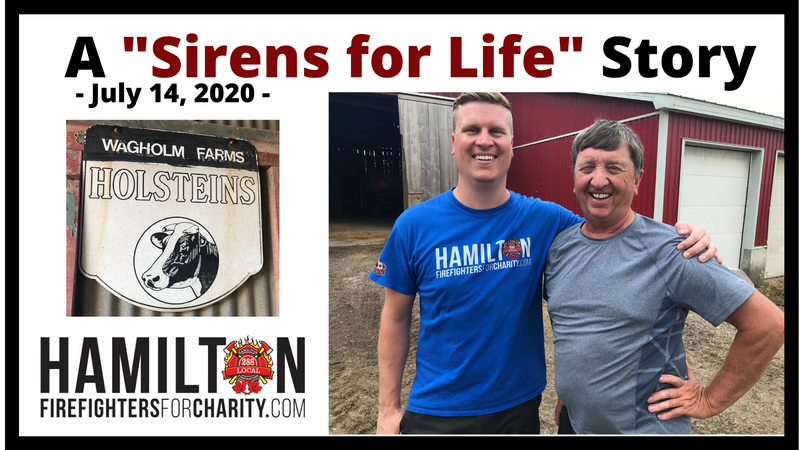 On July 14, 2020, Troy Wagner, who is a member of the Hamilton Professional Fire Fighters Association (HPFFA) – Local 288, made his 50th blood donation to Canadian Blood Services. Troy made this donation during the annual Sirens for Life blood donor campaign in which firefighters, police and paramedics participate in a friendly competition to see who can recruit the most donors.

This was a milestone day for Troy though, one in which he began when he was in high school. At the age of 18, Troy wanted to provide support to his father, Darcy, who requires blood products on a monthly basis due to an immune disease called Hypogammaglobulinemia. This required Darcy to have an infusion process every month for a full day. He initially received treatment for 20 years at McMaster Hospital with the support of Dr. Denburg, then moved for the next 10 years to Kitchener at Grand River Hospital. Now, thanks to technology, Darcy is able to complete the infusions at home.
While not being directly able to donate blood to his father, Troy realized that donating could help someone else in need.

JULY 14, 2020 – FARMING ACCIDENT
After making his 50th donation on July 14, 2020, Troy went home to the family farm in New Hamburg to share the news and celebrate with Darcy and the family. That afternoon, while doing routine property maintenance around the farm, Darcy hit a tree stump hidden in the deep grass and was thrown from the tractor. The tractor proceeded to drive over his pelvis and the large industrial mower hit his lower leg with its blades and removed a large portion of his foot. Luckily Darcy’s phone was not damaged and he was able to contact Troy’s younger brother Carson who began yelling in the house to alert the family. A swift call to 911 was initiated and Waterloo Region paramedics were able to quickly begin care for Darcy with Troy’s assistance before they began transport to Victoria Hospital in London. Darcy would eventually be taken care of by the Critical Care Trauma Team. After three days in an induced coma and on a ventilator, the end result was eight fractures to the pelvis, a significant amount of internal bleeding (requiring 33 units of blood and blood byproducts), and a lower leg that would need to be amputated.
After two weeks in London, Darcy was moved to St Mary’s Hospital in Kitchener where he began his rehab process. By December 2020, Darcy initiated his formal prosthetic rehab training at Parkwood Hospital in London and after three days, he began to test out his new walking abilities. After the six week program Darcy was able to walk out of the hospital using two canes and his new leg.

TODAY
Nearly a year later now, Darcy can be found on one of his many tractors doing field work with his son Carson, in the barn feeding cows, and bossing around the rest of the family on how to keep things running properly.  Troy continues to donate to Canadian Blood Services but switched to platelets on a monthly basis in 2020.
The entire Wagner family would like to thank anyone who has donated before in the past, and would encourage anyone who is thinking about trying to donate to go for it. Every donation counts and could someday go towards someone you care about.

SIRENS FOR LIFE 2021
The 2021 SIRENS for LIFE blood donor campaign kicks off on June 24th and running through until the end of August. Please join us in donating blood during this campaign and support your local Hamilton firefighters, police or paramedics during. Visit blood.ca or call 1-888-2-DONATE for an appointment. To support the HPFFA, please join the HAMILTON FIRE team when registering.

To view results, videos and photos from past Sirens for Life campaigns, please click here