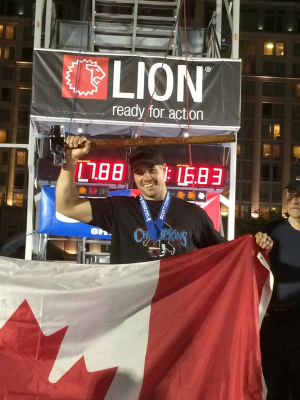 The Hamilton Firefighters Combat Challenge Team recently travelled to Montgomery Alabama to compete in the Scott Combat Challenge World Championships. The team is fresh off their first place finish at the Scott FireFit Canadian National Championships. 14 Countries competed in Montgomery, including a very strong European contingent, and over 700 firefighters. The Team placed 7th this year but the big news is 2014’s World Champion, Justin Couperus, defended his Title by taking home the trophy in a World Record time of 1:16.83. The previous world record was beaten twice that week already by competitors from the US.

The relay team managed a round of 16 win but was beaten out by a team from Austin, Texas in the round of 8.

Another accomplishment was Dean Morrow’s bronze medal finish in the over 40 tandem with partner Stephane Deschesne from Longueuil, Quebec.

The team would like to express its thanks to the Executive and the Members of L288 for their support over the year.

The Executive Committee on behalf of the Membership congratulates the Team on another successful year and in particular Justin Couperus for his World Record. Well done and best of luck the rest of the season.