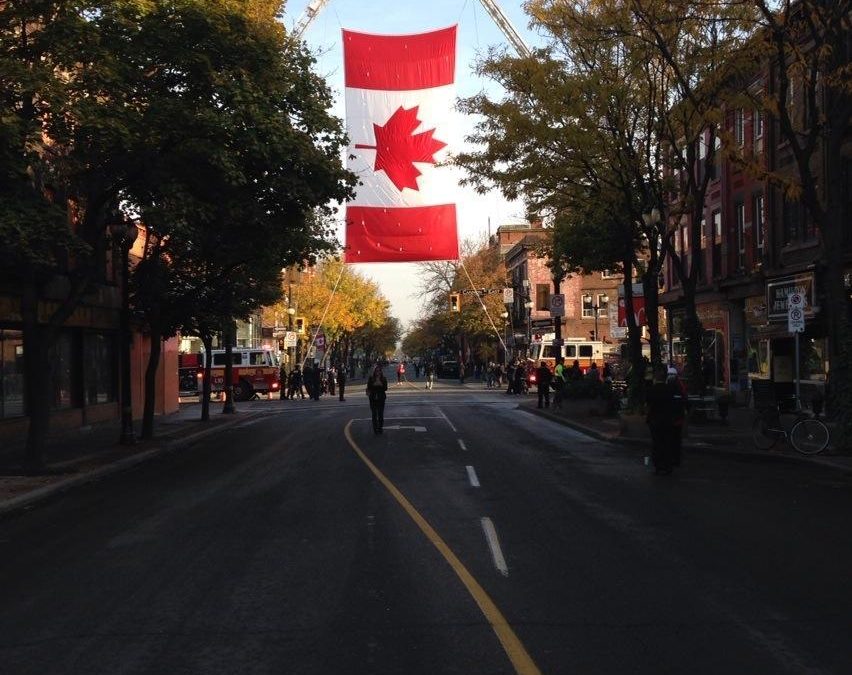 Tuesday morning, two Hamilton firetruck ladders formed an “arch of honour” over the intersection of James and Cannon streets. Firefighters hung a massive Canadian flag from the ladders, a banner over the street where Cirillo’s casket would pass.Police closed streets across much of downtown. The lack of traffic noise added to the unusual feeling of quiet along James Street North, which the city recently dubbed “Veterans Way of Remembrance.” James Street has been closed occasionally for Art Crawl events and Supercrawl concerts, but the day’s events felt much different.

The sidewalk outside the Armoury where Cirillo’s regiment is based was bursting with flowers, cards, candles and flags — a scene that has drawn neighbours, family and friends every day since his death.

Cirillo’s fellow Hamiltonians and Ontarians began lining the streets like a parade, much like they did on Friday when Cirillo’s casket came home. They stood, four or five people deep, anticipating the funeral procession that began at the Argyll Commemorative Pavilion at Bayfront Park.

They wore red and Canada scarves and sweatshirts, draped themselves in flags and pinned poppies to their jackets. Some wore Tiger-Cats jerseys.

A spontaneous rendition of O Canada began along both sides of James as helicopters hovered above and mounted police lined up in front of the cathedral.

Jenny Wasilewski, from Stoney Creek, arrived on James St. North a couple of hours before the funeral Tuesday morning to watch the procession. Tuesday was Wasilewski’s fourth visit to the shrine that has been growing in front of the Armoury.

This weekend, she brought her 12-year-old grandson. He watched her sign a message and her initials on one of the flags hanging there. And then he walked up to the flag and simply wrote: “Thank you.”

A woman writes words of words of condolence on a Canadian flag for Cpl. Cirillo. (Frank Gunn/Canadian Press)

Once the procession had carried Cirillo’s casket into the church, several hundred observers walked over to FirstOntario Centre, where the funeral was simulcast live on the arena’s TV screens.

The Hamilton Bulldogs, used to playing hockey games in the arena, filed in in suits to pay their respects. A group of friends from the Absinthe club on Hess Street attended, appearing visibly emotional. At least 10 different uniformed groups — police, military, cadets, RCMP — stood with their companies on the floor of the arena, watching the screens overhead.

Three full sections of the arena held hundreds of public observers, who seemed to treat the venue as a sacred extension of the church. They sat and stood, recited prayers and followed the service simultaneously with those in the cathedral a few blocks away.

Lieutenant-Colonel Lawrence Hatfield credited the city with easing some of the regiment’s burden as they mourn the loss of Cirillo.

“In this, our most sacred task, the laying of rest of Cpl. Cirillo, we have been lifted by the overwhelming support of this country, this warm and embracing city and our brothers and sisters in arms and in uniform,” he said in the funeral.

Near the end of the service, the pipe band in the cathedral began playing “Amazing Grace.” Some gathered in the arena pulled out handkerchiefs. The uniformed soldiers and police filed out of the arena to join the procession.

Observers watched again as the forces and regiments followed the procession through the streets of Hamilton. Hours after they’d lined the streets, observers went their separate ways.

Cirillo’s loss has knit new connections between Hamiltonians — those who filled the cathedral, those who lined the streets, those who watched in the arena.