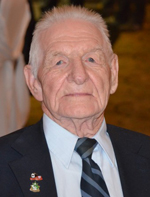 Fred Engelbrecht was a 35-year member of the Hamilton Fire department and a WW 2 veteran.  He was one of 582 Royal Hamilton Light Infantry (RHLI) soldiers who landed on the Beach of Dieppe on August 19, 1942.  Fred was captured by the Germans and was a prisoner of war for the next three years until he and other soldiers were freed by the Allies.  When Fred returned from Europe he joined the Hamilton Fire Department where he rose to the rank of Lieutenant before his retirement.  Annually Fred would come to our Pensioners Banquet and would always share stories and entertain those in attendance about his years on the department and in the military.  Fred was a true Canadian hero and he will be missed by all who knew him.

Visitation for Fred will be at Bay Gardens Funeral Home, 947 Rymal E, from 4 pm – 8 pm on Friday June 1.  The funeral service will be at the same location the following day, Saturday June 2 at 5 pm.  A military style funeral will take place with dignitaries from Hamilton and across the region in attendance.  Current members of the RHLI will serve as Honour Guard and pallbearers.  The Fire Department will have two in service rigs present for both days.  If members wish they can also show their respects, to Fred and his family.