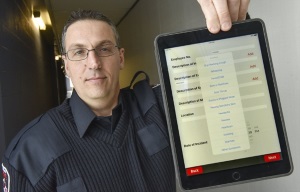 It’s an issue that has plagued firefighters for as long as fires have been fought.

What are the health consequences of all the smoke and hazardous gases unleashed? And how do you keep track of exposures to better understand the role they play with cancers and other health problems down the road?

Officials with the Hamilton Professional Firefighters Association believe they have developed a first-of-its-kind tool to better understand the issue.

It’s an app called Xposure, put together with technical assistance by computer engineering students at the University of Toronto. Firefighters install it on their iPhones or iPads (an Android version is under development and is expected to be available later this year) and open the app after they finish a call.

The firefighter logs in with a personal password and works through a series of questions and drop-down menus. The type of fire, length of time at the scene and short-term health issues such as coughing, wheezing and headaches are recorded, as are other details.

Then the information is stored for future use by the firefighter — perhaps as part of a Workplace Safety and Insurance Board claim — or anonymously mixed with data from other firefighters to examine general trends.

Cancers caused by chemical exposures are a huge concern to the association, which represents nearly 500 firefighters, many of whom were veterans of the infamous 1997 Plastimet fire. More than 400 tonnes of polyvinyl chloride (PVC) and other plastics were part of the blaze, which took about three days to extinguish and is remembered as one of the worst chemical fires in Canadian history.

Association president J. Henry Watson says in recent years it’s become clear to firefighters that “it’s critical to have documentation and the history of what happens to them on the job.”

Up till now, that documentation has been done on paper with log books that each firefighter is given. But the app is so much more efficient at inputting and exporting information, Watson says.

About 20 firefighters have been testing out the app with good results over the past couple of months. A full-scale rollout to all interested firefighters will take place in the coming weeks, Watson says.

The association, he says, is always looking for better ways to keep on top of health and safety issues, especially after Plastimet.

“Plastimet was such a significant event that it certainly brought attention to the exposures firefighters experience.”

The WSIB has been increasingly accepting claims for different kinds of cancers experienced by firefighters across the province. At this point, there are 14 types of cancers recognized under the presumptive legislation for firefighters.

Rob D’Amico, vice-president of the association, says there have been 90 to 100 cancer claims from the association’s members over the past 25 years with three-quarters of them being accepted by the WSIB. The rest are going through an adjudication process.

McMaster chemistry professor Philip Britz-McKibbin, who has done studies on chemical exposures to firefighters, says the app will be helpful. But he noted there are “extraneous factors” that come into play, such as unknown materials that burned and the cleanliness of the firefighter’s gear.

Chemicals can linger from past fires if the equipment is not thoroughly cleaned.

“It’s not just the exposure of the fire alone. It’s also how well the individual can detoxify. Diet and lifestyle play a role in that. Drinking enough fluids to help eliminate contaminants can be an important factor,” Britz-McKibbin said.

“I think the app can help, but there are so many other confounding issues such as diet, hydration status, and how they use and clean and maintain their equipment.”

The app collects data from non-fire calls as well, such as automobile accidents, medical emergencies and rescues. The thinking is the information could play a role in tracking cases of post-traumatic stress disorder and health issues other than cancers.

Shatha Abuelaish, 24, was on the student team at the University of Toronto that worked on the app over the past 18 months. She has recently graduated and has been contracted by the association to manage bug fixes and develop the Android version over the next six months.

The app came about after the association approached the university to make use of a program that gives students real-world experience working with a non-university company or organization.

University officials liked the app idea and agreed to take on the project, which was built from ideas provided by association members.