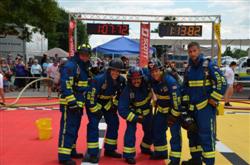 The Hamilton Firefighters Combat Challenge Team has had a great year so far with the most podium finishes of any team in Canada. We recently returned from the National Championships in Edmonton, Alberta where we finished 2nd in team time (sum of top 3 times from our 5 man team, Louis Boiteau, Justin Couperus and Dean Morrow). Only 5/10th of a second separated us from the top team. We also finished 3rd in the relay, getting beat out of the tournament by the eventual winners from Kamloops.

The big news out of Edmonton though is new National Champion Louie Boiteau. Louis had been posting some very fast times all year, never once over 1:20. On the Thursday wildcard day in Edmonton, Louis ran a personal best 1:14.51. On Saturday, finals day, in the pouring rain when every race was slow, Louis ran a 1:14.81 but incurred a 2 second penalty leaving him with a 1:16.81. Louis raced in the second to last race. In the last race, the two competitors both ran a 1:15 but both incurred the same penalty leaving them with a final time of 1:17 and Louis as the new National Champion. After the race, Louis thanked his team and his training partners in a TSN interview, to be aired later this year.

This is a significant accomplishment because these are the fastest athletes/firefighters from across Canada. These athletes train as if they were professionals. Louis has had a personal trainer all year and has been on a very strict with his diet.

Right behind Louis though is Justin Couperus. Louis and Justin had been trading personal best times for the last two years and have a friendly rivalry. Justin finished 6th with a time of 1:17.63. Less than a second separated the top 7. Justin is poised to become the next National Champion, assuming Louis allows it. Written: Dean Morrow