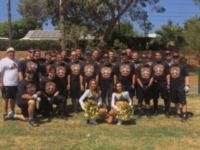 In early August from 11-17 our members took part in the 2017 World Police/Fire Games in Calfornia.  Our flag football team competed in the highly competative flag football tournament.  After finishing at the top of their pool they were successful in the quarter final game but lost in a close game for a birth in the Gold medal game.  The team regrouped and won a bronze medal against a highly oganized team from the Los Angles Police Department  (LAPD).  Congratulations on their success.

We are also eqaully happy to announcent that sister Stephanie Gowanlock competed in the 72 kg class for bench press and won bronze in that division.  Stepha

nie also competed in the highly competative sport of Crossfit and placed fourth.  Congratulations to Stephanie!